Sri Lanka, a South-Asian nation is home to a multi-religious population of 21 million people. The country is unique among its regional counterparts in terms of standards of human development and is the highest rank country in the Human Development Index (HDI). Compared to regional counterparts, this island nation does significantly well in areas of maternal mortality, adolescent birth ratio, and percentage of the population with secondary education.

Twenty-five per cent of the Sri Lankan population is below the age of 14 years. There are about 7.5 million children and adolescents in the country below the age of 18 years. Ginige et al found that there is a prevalence of 13.8% for behavioural and emotional disorders among school children between the ages of 7-11 years in a region in Sri Lanka [1]. In 2009, Perera et al found that the prevalence of autism among 18-24 month-year-olds in a region in Sri Lanka to be 1.07% [2]. These limited studies show the potential burden of mental health disorders among young Sri Lankans.

There are significant reasons for the limited number of specialist doctors in mental health in Sri Lanka. This includes the “brain drain,” which has been a huge problem for many developing nations, as many trained psychiatrists have left the country during the times of war in the past. Between 1997 and 2000, 28% of specialist doctors left the country and moved to developed countries such as the United Kingdom and Australia. Among these specialists, the highest loss of professionals was seen in psychiatry, with 56% of qualified psychiatrists leaving the country from 1997 to 2000 [3]. Another factor that leads to the low number of psychiatrists in Sri Lanka is the low popularity of psychiatry as a career choice among medical undergraduates. A study revealed that only 2% of undergraduates desired psychiatry as a postgraduate pathway, which is far below the rates for undergraduates in the West [4].

The first medical school in Sri Lanka was established by the British in Colombo in 1870. At first, medical graduates who wanted to pursue a career in psychiatry travelled to the United Kingdom to obtain psychiatry specialist training. The first MD examinations were held in the country in 1952. However, there were no systemic teaching programs; the Institute of Postgraduate Medicine was established in 1976 to fulfil this need. In 1980, the current Postgraduate Institute of Medicine obtained full recognition from the government to award postgraduate degrees in medical specialities.

For many decades, the priority of mental health policy developers in Sri Lanka was to encourage the establishment of general psychiatry services to minimise the mental health gap and spread the specialist services throughout the country. The brutal armed conflict in the northern parts of the country and the emigration of professionals in the previous decades were a major hindrance to the development of the field of psychiatry [6]. The limited number of psychiatrists in the country were mainly stationed in large tertiary care hospitals in the cities and were overburdened by the workload related to major psychiatric disorders. The inpatient facilities and outpatient services in general hospitals were the core and the focus of mental health care. Almost all general psychiatrists had to cater their services to diverse patient populations that included children, adolescents, the elderly, alleged offenders, and substance users. A regional consultant psychiatrist would have been responsible for services to an entire district or province. This meant that the specialist had to be skilled and available to all service users, not only for adults. The number of specialists has slowly risen, and it has now become possible to plan for subspecialist services.

At present, the main inpatient mental health facilities for children below 12 years are available at the Lady Ridgeway Hospital for Children in Colombo, which is the largest city in the country and the commercial capital. Also, dedicated inpatient care for adolescents is available at the National Institute of Mental Health in Angoda, Colombo. The child and adolescent mental health services in peripheral regions often lack the services of allied health staff members such as psychologists, occupational therapists, speech pathologists, and nursing officers, which are in low numbers compared to in the West.

Sri Lanka College of Child and Adolescent Psychiatrists is the only professional organisation in Sri Lanka related to child and adolescent psychiatry. It was established in 2015 and has grown in number and strength over the years. 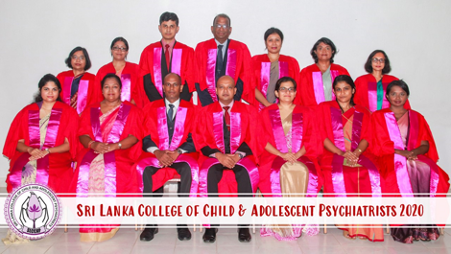 The third Biennial Scientific Conference of the Sri Lanka College of Child and Adolescent Psychiatrists was held successfully at the National Institute of Mental Health in Angoda, Sri Lanka on 20th to 21st December 2019. More than 100 medical professionals and allied health staff members participated in the conference. The theme of the conference was ‘child and adolescent mental health – reaching out to all’. 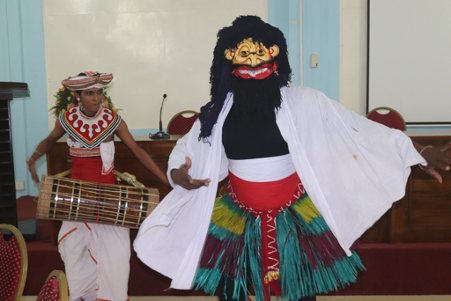 Traditional Sri Lankan dancing and drumming at the conference

The guest of honour was Dr Vibhay Raykar, a Child and Adolescent Psychiatrist and Clinical Director of the Child and Adolescent Mental Health Service program at Goulburn Valley Health, a large regional hospital, located in Shepparton, Victoria, Australia. His keynote address was titled ‘child psychiatry beyond the confines of a clinic’ and later he spoke about developmental trauma and transgenerational trauma. In his presentation, he addressed the need for the services to be trauma-informed and the impact of early life adversities on the lifelong mental health of an individual. Later Dr Anula Nikapota was remembered fondly. She was one of the pioneering child psychiatrists in Sri Lanka and contributed immensely to the development of the field in Sri Lanka as well as worldwide. 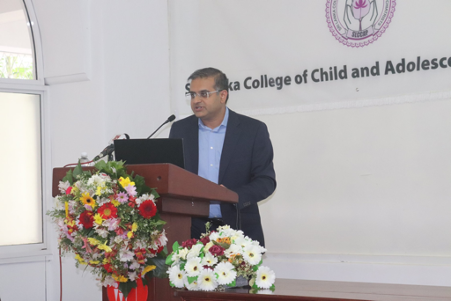 The guest of honour Dr Vibhay Raykar addressing the conference

Telemedicine has been used widely in psychiatric consultations in the West and has been successfully implemented in child psychiatry as well. The government should consider providing telemedicine and secured work email facilities to overcome the difficulties related to health access, which has been tested and found to be feasible in Sri Lanka. However, telemedicine may not be a suitable model to assess, discuss and treat all patient groups.

Sri Lanka is a small country with a high population density. It is possible to travel from the Northern end to the Southern end within about 10 hours. Therefore, if a referral system is well organized and streamlined, children and adolescents with diagnostic dilemmas, treatment resistance, and complex family dynamics could be arranged to be seen by a specialized child and adolescent mental health teams functioning in tertiary care hospitals. After psychological formulation, diagnostic clarification, and initial management, children and adolescents might be referred back to secondary level hospitals where teams comprising of general psychiatrists and paediatricians are available. Such a referral system must be computerized for higher efficiency. The cost would likely be recovered over the years with better treatment outcomes, as has been shown for chronic disease management in developed countries.

The International Association for Child and Adolescent Psychiatry and Allied Professions’ (IACAPAP) is an organisation dedicated to advocate for the promotion of the mental health and development of children and adolescents through policy, practice and research. The Sri Lankan child mental health professionals must communicate constantly with global experts to gain knowledge and experience to develop services in the country. The collaboration of Sri Lanka College of Child and Adolescent Psychiatrists with the IACAPAP could help to facilitate this process in the coming decades.