Challenges during the Covid-19 Pandemic in Spain and Houston. Coping with chaos, moving forward.

It is difficult to describe how you feel when you see your home country devastated due a pandemic, with business and factories closed, empty streets, people on mandatory 24-hours curfew, a State of Emergency declared, and overcrowded Emergency Rooms, ICU’s and morgues.

Spain, with a population of 47 million inhabitants, is one of the countries with the highest number of COVID-19 cases and deaths per million inhabitants. At the time of writing this article, we had 5,110 diagnosed cases per million inhabitants in Spain, and 5,753 in the USA. In Spain, the death rate was growing so fast that funeral homes could no longer cope. They had to “store” bodies at the Ice Skating Stadium in Madrid, also known as “The Ice Palace”.

In a matter of days we had gone through all the stages of grief and loss due to Covid-19 pandemic. From an initial “denial and isolation” phase (“it will not happen here”), to a second “anger” phase, where we were trying to find out who was to blame. Then the bargaining phase, we tried to reassure ourselves thinking “the virus is only lethal if you are too old, or suffer from poor physical health”. Then, reached the “depression” phase (it’s here, and I am not doing enough), and finally we will reach the “acceptance” phase.

One thing that helped was to see our peers via Teleconference, and attend lectures on how people actually cope. I recommend Dr Faraz’s Small gestures, Little victories (1) to focus on small day to day achievements. Also Dr Keenmond’s LinkedIn article (2), on the guilt some psychiatry clinicians may experience as they think they are not doing enough, as we are not in the ICU’s, and the “hero” complex that makes you forget you should also take care of yourself.

In the US, a mom told me during a Clinic visit that people were crowding supermarkets, hoarding toilet paper, rice, spaghetti, beans “we’ve got lots at home!” the child said. Some stores run out of guns “just in case”. A child who had seen her own father dying of COVID-19 and who was depressed and refusing to eat was too terrified of leaving her house to go to an appointment. Some other kids had enrolled in dangerous online habits, and started playing the “Momo Challenge”. Telemedicine appointments showed families with disorganized day-to-day habits; in their pajamas at the middle of the day, personal hygiene was not a priority. I had Telemedicine visits while patients were at work, shopping, driving (“mom, can you please park?”) and even Telephonic visits in the bathroom, as I could hear the toilet flush…total chaos. Some parents attended the Telemedicine visit with the whole family in front of the computer, as if it was a TV show, forget confidentiality laws.

In Spain citizens were on mandatory 24 hour curfew, only essential workers were allowed to go to work. The rest of the population could only leave their (many times too small) house if they needed to go to the pharmacy or to the nearest grocery store, and at the risk of getting a huge fine or a detention. By contrast, citizens were allowed to walk their dogs and to take the garbage out, so some people abused the system to walk miles away from their homes.

In Spain, all schools and Universities closed on March 11th. Kids and young people started to receive mail with school assignments and enrolled in online teaching. However, these children required constant parental supervision, which was difficult to give as their parents had also to work from home to keep their jobs. As a result, school assignments started piling up, and both children and their parents got frustrated.

At the time of writing this report, children in Spain are still not able to go out and enjoy the outdoors freely. They are not allowed to see their grandparents, some of whom have sadly died due to COVID-19, some others are too scared of getting infected during a second wave. Children are missing their schools and their friends; they are just desperate to go back to their previous lives. Some have begged their own parents “Mum, can we see our school?”.

Anyhow, we need not just to move on, and forget but to “move forward” whilst carrying all the memories and experiences from the pandemic. That is, not forgetting and moving on, but keep all what you learnt and incorporate in your “self”. Like when you lose a loved one. You keep the moments you share. Like when you are an immigrant in a foreign country or culture, or when you leave your parent’s home. You carry your past, childhood experiences, roots, values, and cultural background. However, when you return to your own country, or your parent’s home, you never come back to the same place, because that place has changed. As Heraclitus stated, “No man ever steps in the same river twice, for it’s not the same river and he’s not the same man”. The waters are constantly running.

We shall never forget the loved ones we lost due to COVID-19 and the part of our life we lost: moments with our families, that trip that had to be cancelled… We will keep all these “golden moments” as memories for the rest of our lives. 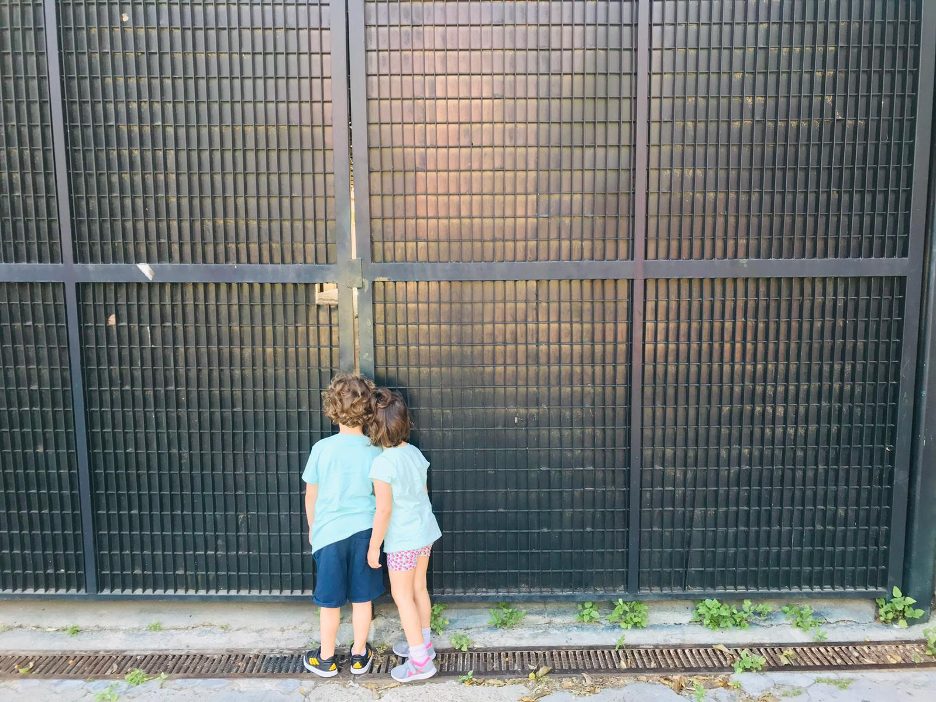 “Can we please stop and see the school?” Photo: Pablo Lobato de Enciso