Asido Foundation: The Birth of a Mental Health Advocacy Organization in Nigeria

Jibril Abdulmalik is the Founder/CEO of Asido Foundation.

Aisha (not her real name) was a secondary school student in Northern Nigeria who committed suicide after being publicly humiliated by the school authorities as a result of their ignorance about the psychological needs of an adolescent. Dupe (not her real name), an undergraduate at a Nigerian tertiary institution was noticed to have become withdrawn, irritable, and is often weepy for no reason at all. A friend of hers who had attended a seminar on mental health problems on campus; ensured that she saw a psychiatrist and she soon recovered. All over the world, women live longer than men; and depression is more common in women versus men (ratio 2:1). It is therefore not surprising that old women with depression may suffer from delusions of guilt, and blame themselves for every negative thing that has ever happened. In several Nigerian communities, that will be a basis for societal ostracization; as the conclusion will be that of a witch confessing her ‘sins’. Across many communities, persons with mental illness are more likely to be taken to traditional and faith-based healing homes; than to be taken to hospital for quality care. Children with mental health problems are especially vulnerable, but often neglected in many communities.

It is against this backdrop of misconceptions and ignorance around mental illness, that human rights abuses, stigma and discrimination, as well as untold suffering for affected persons and their families become the norm – regrettably. The biopsychosocial explanations including the medical basis for mental disorders is often treated with cynicism – due to the predominantly supernatural beliefs about etiology. Furthermore, civil society and service user organizations working in the area of mental health remain are pitifully few. While governmental priority and funding for mental health service improvements remains very low.

The Asido Foundation is a relatively new entrant on the Nigerian landscape, as a not-for-profit organization that seeks to counter the ocean of ignorance around mental health issues across the lifespan by providing evidence – based information. It has started engaging in advocacy and intervention activities aimed at improving the mental health needs of the Nigerian population. The Convener of Asido Foundation, Jibril Abdulmalik, had been penning a weekly column, to promote mental health awareness in a national daily – The Nigerian Tribune on Thursdays, for the past 3 years. The column titled “Your Mental Health & You” is usually circulated widely via social media, in order to gain the attention of young persons who may not bother to read boring newspaper articles. The tremendous feedback and extent of public engagement with these articles, revealed the magnitude of the need for effective public mental health awareness campaigns. Thus, the Asido Foundation is striving to step into this gap, by creating a platform to harness resources (human and material), for a more effective and impactful public engagement campaign. 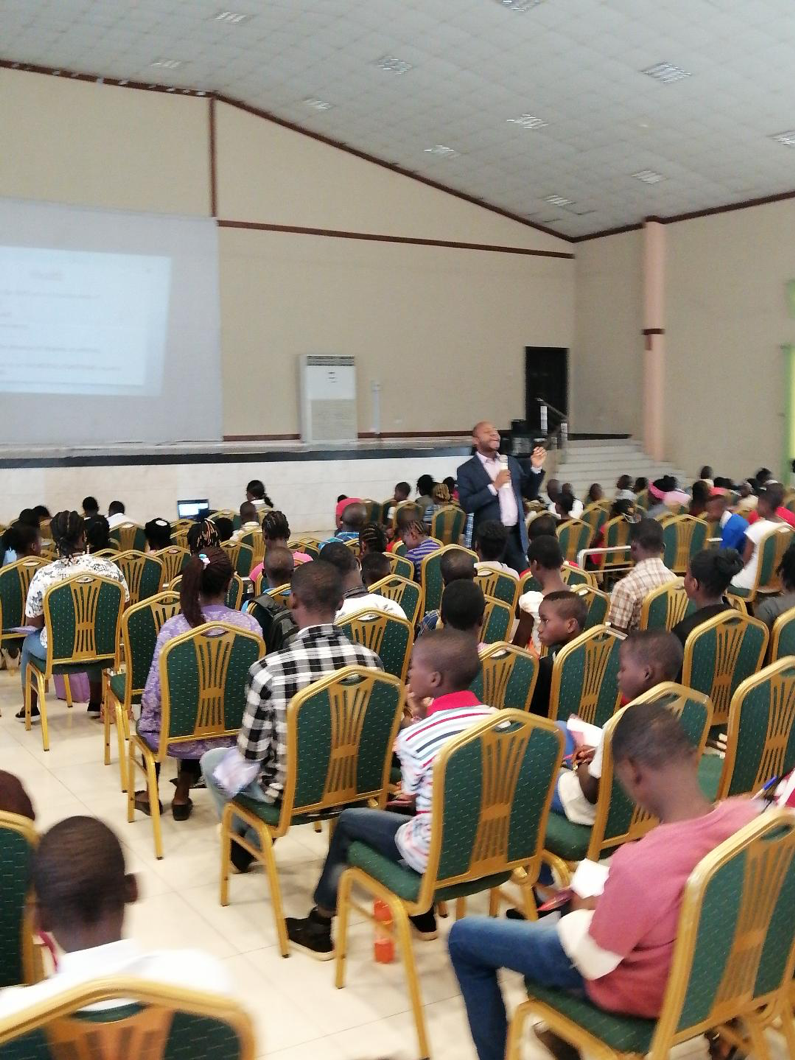 and a University wide awareness walk to commemorate World Suicide Prevention Day at the University of Ibadan, Nigeria (See Picture 2). 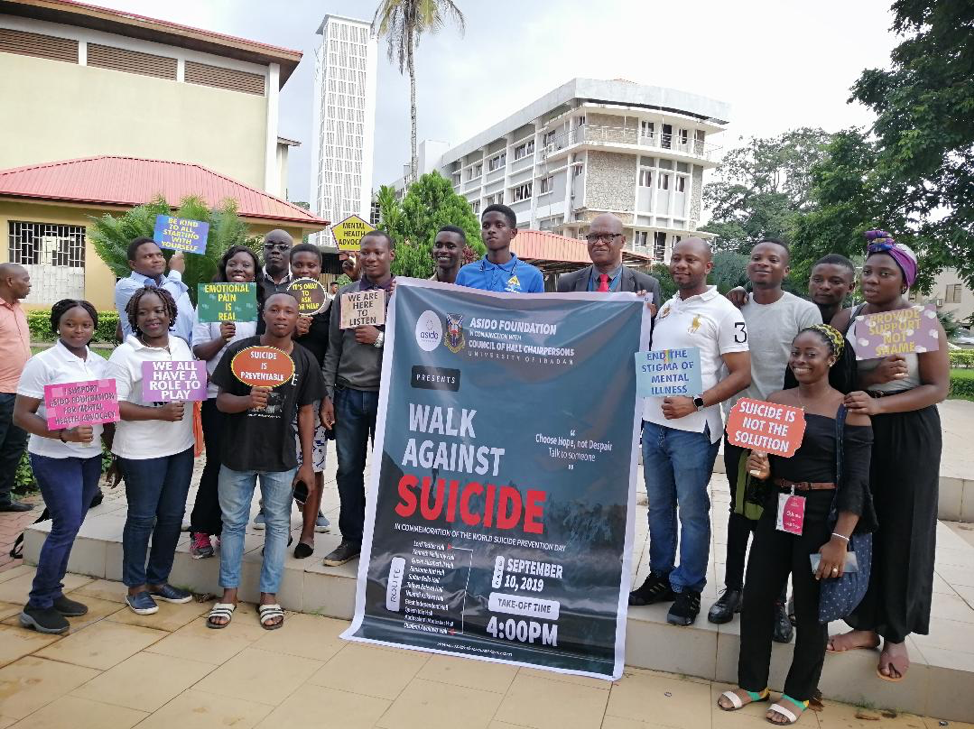 Using innovative deployment of social media that targets especially young members of the community, the public engagements of the Asido Foundation is attempting to slowly but steadily change the narrative around mental health in Nigeria and beyond. The first tangible fruit of this public engagement, is the compilation of the weekly Tribune articles into a book titled “Optimal Mental Health: An Everyday Guide”, which was launched on the 2nd of September 2019 in Ibadan (See Picture 3). Secondly, it seeks to leverage on the power of collaborations to amplify impact and draw policymakers’ attention to mental health governance and services. Specific attention will be focused on the huge child and adolescent mental health needs as an urgent public health priority for nation building. 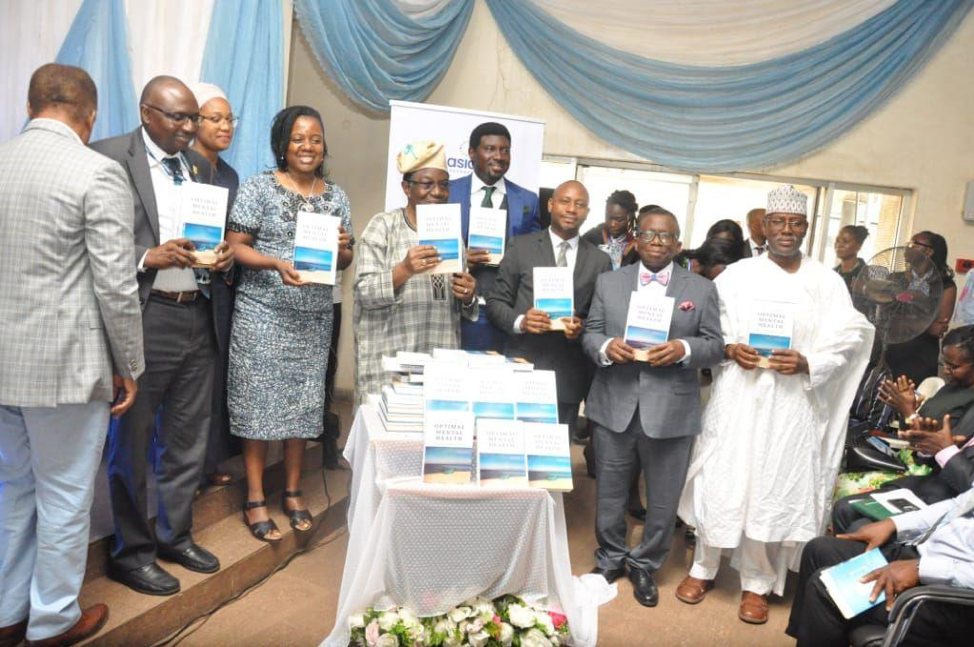 Indeed, ending the silence around mental health issues and generating discussions will go a long way towards promoting better understanding, improving empathy and facilitating recovery. This should further alleviate the burden of affected persons and their families. Ultimately, concerted efforts at advocacy, service user empowerment and the push for reforms and improved mental health system governance systems should yield tangible dividends and improved mental health care for all citizens and especially for the nation’s youth. These efforts and engagements are long overdue in Nigeria, as well as other developing countries.